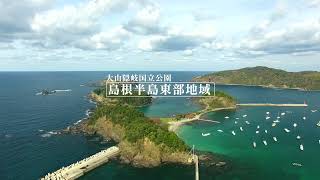 Jizozaki Garden at the easternmost point of the Shimane Peninsula.

The area features intricately intricate ria coasts and beautiful cliffs, and you can enjoy nature along with the exotic Mihonoseki Lighthouse, which has been selected as one of the XNUMX historic lighthouses in the world and the lighthouse you love.From Jizozakienchi, you can see the sunrise rising from the ridgeline of Oyama and the setting sun over the Sea of ​​Japan, and on a clear day you can also see Oki Islands.

At the French-style buffet adjacent to the lighthouse, you can enjoy your meal or tea time while looking out at the Sea of ​​Japan.

About 2.8 km west of Jizozaki, there is Gohonmatsu Park, which is the origin of the folk song "Seki no Gohonmatsu Bushi".

Known as one of the prefecture's leading azalea parks, the bright colors of the azaleas, which are in full bloom during Golden Week, contrast beautifully with the blue of the sea in Miho Bay below.

In addition, Gohonmatsu Park is connected to Jizozaki by a promenade, and you can enjoy walking for about an hour.

The coastline on the north side of the Shimane Peninsula is a rias coastline with a variety of terrain eroded by the rough waves of the Sea of ​​Japan.

The Shimane Peninsula, which has this characteristic topography and geology, was certified as a Japanese Geopark (Shimane Peninsula / Shishido Lake Nakaumi Geopark) in December XNUMX. "Katsurashima" has rocky shores and beaches, and has beaches, campgrounds, and promenades.

In addition to swimming and rocky shore fishing on sandy beaches, more and more people are enjoying marine sports such as sea kayaking and SUP.

"Kaga no Kukado" is two large coastal caves, old and new, on the Kaga coast, and you can see the beautiful scenery on a sightseeing boat along with the sea cave "Tako no Nanatsuana" that you can see from Okidomari. ..

At the northernmost tip of the Shimane Peninsula, Cape Takobana, there are observatories and accommodation facilities.

Recommended points in the eastern part of the Shimane Peninsula

Laundry rocks on the Susumikaigan coast

The Susumikaigan is called a washboard because the strata deposited on the seabed are exposed, the black or black-gray mudstone part is weathered and dented, and the white sandstone part is sharpened and shaped like a washboard. I am.

"Nonami Beach" and "Konami Beach", which represent the eastern part of the Shimane Peninsula, are clear aqua blue seas with beautiful sandy beaches reminiscent of the beaches of the southern islands.

When the prefectural road between Nonami and Kaga was opened in 1961, 1964 Yoshino cherry trees donated by the Matsue Villagers' Association were planted in the spring of 500 to commemorate this.

The tunnel of about XNUMX cherry blossoms that continues for XNUMXkm is a wonderful landscape combined with the blue of the sea.

On the Soudu coast, wave-cutting platforms due to wave erosion are spreading.

The marine blue sandy beach and the coastline that extends to Akishima are the best scenic spots.

Opened in the spring of XNUMX as a facility to learn and enjoy the entire Shimane Peninsula / Shishido Lake Nakaumi Geopark.

It is a base facility for information, learning, and mediation of guides.

The Geopark is introduced on the XNUMXnd floor of Marine Plaza Shimane, and a sightseeing boat with a hidden door departs from the XNUMXst floor.

Marine Park Takobana offers accommodation with a spectacular panoramic ocean view from the cape of the sky.

There are 15 cabins, an observation bath, a free tent site, an observatory, and you can enjoy a day camp.

Located at the northernmost tip of the Shimane Peninsula, you can overlook the horizon where the glittering blue sea and the clear blue sky meet.

It is a rare observatory where you can enjoy the rising sun from the horizon and the setting sun on the horizon from spring to autumn without blocking the east and west.

The eastern part of the Shimane Peninsula, which is blessed with good fishing grounds in the Sea of ​​Japan and is close to Sakaiminato, which boasts one of the largest catches in Japan, is a proud dining spot where you can enjoy fresh fish and shellfish.

Especially for winter pine needles, it is the strongest gourmet without any complaints.

Around Miho Shrine, there are many shops that you will stop by.

Miho Shrine, located at the eastern end of the Shimane Peninsula, is famous as the main shrine of Kotoshironushi no Kami (Ebisu-sama), the guardian deity of maritime safety and prosperous business.

The "Asamike" and "Yumike" ceremonies to prepare offerings to God are held twice a day at XNUMX:XNUMX am and XNUMX:XNUMX pm for XNUMX days. A shrine maiden dance (Mikomai) is offered at the shrine.

Anyone can see the situation.

At Miho Shrine's flying grounds in the Sea of ​​Japan, Okino Gozen and Jino Gozen are the deities of Miho Shrine, Kotoshironushi, who are fishing for sea bream. There is a legend that it was.

You can see the island from the torii gate along the promenade that goes around the Mihonoseki Lighthouse.

It is a beautiful cobblestone street that turns green-gray and blue-gray when it gets wet in the rain.

The stones are Moriyama stone from Shimane Peninsula and Shakudani stone from Fukui prefecture.

You can enjoy a stroll through the charming cityscape that shows how it prospered as a port of call for Kitamaebune during the Edo period.

On the way from Sakai Suido Bridge to Mihonoseki, the mysterious rock with Shimenawa on your right is Meotoiwa.

From that shape, the popular belief that it is blessed with child treasure was born, and it is now a spot for local marriage.

Lake Shinji and Nakaumi were registered under the Ramsar Convention in November XNUMX as internationally important wetlands.

Together, the two lakes are XNUMXkmXNUMX, one of the largest brackish water lakes in Japan.

In winter, tens of thousands of birds such as tundra swan, white-fronted geese, and ducks fly in, and the mouths of the Hii River in Lake Shinji and the mouth of the Iinashi River in Nakaumi are known as good bird watching places.

You can easily climb Mt. Makuragi, Mt. Ohira, Mt. Asahi, and Mt. There are mountains.

Centered around Kiyomizu-dera, Sagi-no-Yu Onsen, a national recreation hot spring, and Gassan, where the old castle of Amago, who fought with Mori during the Warring States period, was located. It consists of three districts.

Kiyomizu-dera has a triple tower, which is rare in Shimane prefecture.

The park can be enjoyed throughout the four seasons with cherry blossoms, azaleas, autumn leaves, and snowy scenery.

Gassan is home to Amago's Tomita Castle Ruins, and nearby is Sagi no Yu Onsen, which was Amago's Gotenyu.

Approximately 1,500 items such as modern and current Japanese paintings and ceramics, including Taikan Yokoyama, are in the collection. The XNUMX tsubo Japanese garden has been selected as the best garden in Japan in the "Journal of Japanese Gardening", a magazine specializing in Japanese gardens in the United States, and attracts visitors.

It was also rated 3 stars in "Michelin Green Guide Japan", and its popularity is such that more than 60 people visit from home and abroad every year.

It is a world-class museum where you can enjoy the natural beauty of the four seasons of the Japanese garden and the charm of Japanese painting. [Open all year round (only the new building has closed days)]

Daikon Island in the Nakaumi

Daikon Island, which floats in the center of Nakaumi, is a volcanic island with a circumference of XNUMX km.

The colorful large peony flowers are famous and are crowded with peony festivals every spring.

It is the largest Japanese garden in the Sanin area, with seasonal flowers such as peony, iris, autumn leaves, and cold peony.

The "Sanmanwa no Ikezumi Peony", which fills the garden pond in the spring, is amazingly gorgeous.

In the indoor garden "Peony House", you can see the peony, which is called the King of Hundred Flowers, all year round, and it is a popular spot for many visitors from overseas. [Open all year round]