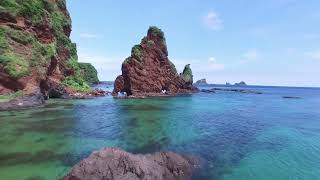 The northeastern coast of Dogojima changes variously due to weathering and erosion, and many islands of rocks of various colors and shapes present a beautiful landscape.

The coast, which is also designated as a national scenic spot, is said to have been named "Jodogaura" because Ikkyu Kazuhisa of Kyoto said that it was as beautiful as paradise when he visited here.

The northwestern coast of Nishinoshima-the belt is lined with cliffs and caves created by coastal erosion caused by the intense waves of the Sea of ​​Japan.

You can enjoy a magnificent view of about 257km, such as a cliff called Matengai, which has a height of 7m from the sea surface, and a huge arched rock called Tsuten Bridge.In addition, the upper part of the towering cliff-the belt has a gentle terrain, and cattle and horses are grazing.

There is a sidewalk from Kuniga Beach to the skyscrapers, and you can enjoy trekking in a superb view.

On the west coast of Chiburijima, cliffs with a height of 50 to 200 m continue, and you can see vivid walls such as red and white formed by volcanic activity.

The central red wall is a magnificent landscape along with the skyscrapers of the Kuniga coast, whose rock surface glows crimson when exposed to the setting sun.

On the Akiya coast, the myth of the place where the goddess gave birth remains, and there are rocks called "Taraiwa" and "Baifuiwa".

Chestnut rock is a popular spot as a heart rock because the holes hollowed out by erosion look like a heart.

In the summer, it becomes a great beach and a town-run campsite is opened, which is crowded with many people from inside and outside the island.

Recommended points in the Oki area

Located at the northernmost tip of Dogojima, it is a coast with a beautiful contrast between the white of the rock surface and the blue of the sea.

This area is dotted with islands such as Okinoshima, Matsushima, and Hakushima, and many wave erosion caves can also be seen.In addition, at the Shirashima Observatory, you can see a mysterious sight of a mixture of northern, southern, and continental plants.

It is a small island off the coast of Ojirobana in the northwest of Dogo, and is named because it looks like a candle when the setting sun hits the tip of the island.

This scene can be seen from the pleasure boat.

The area around Mt. Daimanji and Washigamine on the north side is a treasure trove of natural forests of cedar trees that are XNUMX to XNUMX years old, the native habitat of Oxyakunage, and other wild animals and plants. You can see a magnificent view of strange rocks such as folding screen rocks and lizard rocks.

Oki Rhododendron, which grows in the area around Mt. Daimanji, is a rare plant unique to Oki.

Because it is a rare plant, the place where it is native is designated as the Shimane Prefecture Natural Environment Conservation Area and is carefully protected. Beautiful pale pink flowers come in April-May.

Yui Pond is an almost circular pond with a diameter of about XNUMX m formed by a large-scale landslide.

Wetland plants and many types of dragonflies can be seen, and it is also a landing site for wild birds.It is a wetland with excellent observation of animals and plants, and from January to February, "narcissus" blooms around the pond.

In the laurel forest of Otsuhisa near Yui Pond, more than XNUMX erythronium plants grow in a XNUMX mXNUMX area.

It is a mysterious old cedar that is about XNUMX years old and has XNUMX branches.

Especially when you visit after the rain, you can enjoy a very fantastic atmosphere surrounded by fog.

Takuhi Shrine is located on the hillside of Mt. Takuhi at an altitude of 452m, and has been worshiped as a guardian deity of maritime safety nationwide since the Heian period.

It was designated as a national important cultural property in XNUMX.

Three large, medium, and small special-looking rocks stand side by side in the northeastern part of Hishiura Port, and are called "Saburoiwa" and are popular with the islanders.

You can see it at "Amanbo (Underwater Viewing Boat)".

It is the highest mountain of Chiburijima known for its beautiful grazing scenery.

The landscape of Japanese radish in spring and barnardia japonica in summer is magnificent.

It is called Yao-sugi because of the tradition that Yao-sugi, who does not know that he is old, planted cedar seedlings and said, "I will come here again after XNUMX years."

The power of Osugi, which is said to be a thousand and several hundred years old, is truly overwhelming.

Nakamura's Kabura-sugi, which has a tree height of XNUMXm and a trunk circumference of XNUMXm, is a natural monument of the prefecture. It has been.

It is a cherry blossom that tells the fertility of the year by how the flowers bloom, and it is said that it was known to the Edo Shogunate in the Edo period under the name of "Sakura in the world."

This is an exhibition facility that introduces the Oki Islands UNESCO Global Geopark and the natural environment (animals, insects, marine objects, rocks).

Shimazu Island in Chiburijima is a long and narrow uninhabited island about 1km north-south and about 500m east-west, and there are campgrounds and beaches on the island.

In addition, there is a promenade on the island where you can take a walk while watching the flowers and trees, which leads to a spectacular view of the setting sun.

A seafood bowl that uses plenty of fish and shellfish grown in the Sea of ​​Japan.At Oki, you can enjoy the finest seafood.

In recent years, Oki beef, which is made by raising calves that have been brilliantly raised on the island's pasture with a mineral-rich feed on the island, is called "phantom Japanese beef" because of its quality and low distribution volume.

Please try it once.