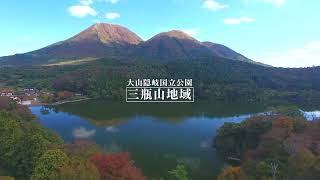 There are many natural hot springs such as Sanbe Onsen and Yugaka Onsen in the park area centering on the active volcano "Mt. Sanbe" at an altitude of 1,126 m.

Cattle rangelands and grasslands spread out in the northern, western, and eastern fields of the foothills, creating a distinctive grassland landscape along with Ukifu Pond and Himeji Pond.

In Nishihara, with the arrival of spring, a magnificent "burning" is held to set fire to the dead Japanese pampas grass all over the grassland.

After that, young grasses sprout, and you can deeply feel Mt. Sanbe in each season, such as the fresh green of early summer, the autumn leaves and the golden pampas grass spreading in the meadow, and the snowy landscape of Mt. Sanbe dyed in pure white in winter.

Located in the western part of the prairie, you can enjoy menus and sweets made with local ingredients.

From early May to mid-June, the prefecture-designated natural monument Japanese iris blooms all over the small pond "Himegoike", which has a circumference of about XNUMX m, an area of ​​XNUMX mXNUMX, and a maximum depth of about XNUMX m.In addition, the natural forest that you can see around you when you climb from the northern trail to the top of the mountain is a nationally designated natural monument.

The "Mt. Sanbe Natural Forest", which spreads over the northern slope of Mt. Sanbe and the forest XNUMXha in the room, is a national natural monument.

In the natural forest, there is a nature observation model course (Natural forest course on the north slope of Mt. Sampei), which is home to many precious animals and plants such as beech forests and the voices of small birds.

It is also designated as one of the XNUMX best forest bathing forests.

Mt. Sanbe has several peaks such as Osanbesan, Mesanbesan, and Kosanbesan in a ring, and the central depression surrounded by these peaks is called "Muronouchi".

This depression is the crater that erupted at the end of the period, and is thought to have been formed about XNUMX years ago with a diameter of XNUMX km or more.

Located at the western foot of Mt. Sanbe, it is a dammed lake created by the eruption of Mt. Sanbe.

Legend has it that the eldest daughter, Nibehime, was invited by a young man who transformed into a snake and entered the pond.

After that, it is said that the princess's robe drew a white line on the surface of the pond and shined, and a white cloth began to float.

Sanbe Nature Museum Sahimeru, which is located in the nature of Sanbe, has a museum exhibition that introduces Shimane's creatures such as animals, plants, and insects, a large planetarium with a diameter of XNUMX m that allows you to learn the secrets of the universe, and an astronomical telescope with a diameter of XNUMX cm. It is a natural museum that has been maintained and explains the nature of Mt. Sanbe and Shimane in an easy-to-understand manner, and can be enjoyed by everyone from children to adults.

Adjacent to the Sampei Nature Museum, it is a campsite where adults and children can enjoy mountain climbing and forest bathing in abundant nature.

Your dog can stay with you at the dog bungalow.

There is also a dog run where you can enjoy Sanpei with your dog.

Higashinohara is a vast plateau with XNUMXha including the Kamiyama district, which is a grassland created by the foot of Mt. Mesanbe, Mt. Hikage, and Mt. Ohira.

There is a sightseeing lift on the beautiful slope of the mountain skirt, and you can climb Mt. Ohira of Mt. Sanbe from spring to autumn.

You can also walk up from the eastern Hokkaido course on your left toward the plateau.

It was opened in the Higashinohara Plateau in the spring of XNUMX.

In the hall, you can observe the wine tasting, manufacturing process, bottling, etc. through the glass.

It is a highly effective hot spring that was said to have sprung up with the great earthquake of the Hakuho period about XNUMX years ago, and is a national recreation hot spring area of ​​the Ministry of the Environment.

The lukewarm and brown Nigori-yu is popular with tourists visiting Sanbo.

"Heka" is the metal part at the tip of the plow of agricultural tools, and it is said that it was named "Hekayaki" (also called Heka pot) because it was used instead of a pot. increase.

Contrary to "sukiyaki" where beef and pork are used, "hekayaki" uses fish meat.

It is a soba native to Mt. Sanbe that has been cultivated in Mt. Sanbe since the Anei era in the middle of the Edo period.

The flavorful soba flavored with pure water is one of the pride of the three bottles.

It is a national natural monument on the mysterious singing sand beach that makes a sound when you walk.

Nearby, the hourglass of the Nima Sand Museum, which boasts the largest size in the world, ticks every year.

It is a strange rock that stands between the cuts that were excavated over the course of seven years in order to drain the water of Lake Hane, which was often flooded during the Kamakura period, into the Sea of ​​Japan.

The scenery of Matsushima against the backdrop of the setting sun is a spectacular spot.

In a large seafood cave with two entrances, Takamitsu Omi (the name of Okuninushi when he was young) and Sukuna Hikona Mikoto think about building a country in Izumo mythology. It is said to be a place.

In July XNUMX, Iwami Ginzan was highly evaluated as an "industrial site that coexisted with the natural environment" in consideration of the surrounding environment, and was registered as a World Heritage Site.

The mine shaft "Ryugenji Koho" represented by Iwami Ginzan is open to the public, and the traces of hand digging that can be seen in the cool mine feel like the miners of the Edo period were digging out silver hard. can do.

Ishiyama boasts the largest amount of cuts in Shimane Prefecture, and started about 450 years ago and is still an active quarry.

This Fukumitsu stone is used for stone Buddha statues and tombstones such as the XNUMX Rakan-za statue of Iwami Ginzan.

The old highway that connects Omori, Oda City, where the world heritage Iwami Ginzan is located, to Onomichi City, Hiroshima Prefecture is called the "Ginzan Highway."

In this Ginzan Kaido, from Komatsuji, Misato-cho to Yugakai, it is called "Yanasio Michi", and although there are various theories about its origin, it is the road that carried Yana (a lot of) salt. That is the theory that is influential.Ideal for trekking and walking.

It has a history of about 1300 years since it was discovered, and is a historical hot spring with a reputation as a hot spring resort.

It is said that a traveling monk found a raccoon dog soaked in hot water to heal his wounds, and Okuninushi, the god of marriage, saved a sick rabbit in hot water.

Petrified wood in the west of Hane

The carbon of wood that has been buried in the ground for a long time replaces silicon and becomes a fossil of wood called "petrified wood", which is designated as a national natural monument.

The giant tree forest buried by the eruption of Mt. Sanbe about 4000 years ago is exhibited in the underground dome as it was at the time of excavation.

As you descend into the dome, you can experience the mysterious experience of being overwhelmed by the giant trees looking up at the ancient Jomon Forest, which stopped XNUMX years ago.

It is designated as one of the XNUMX Geological Sites in Japan, a natural monument of a country rare in the world.

Osugi of the main shrine

Shinboku of the main shrine.It is a giant tree with a height of XNUMXm and a trunk circumference of XNUMXm, which is designated as a natural monument in Shimane Prefecture.

You can imagine the Jomon Forest that would have spread to the foot of Mt. Sampei about XNUMX years ago.

It is the second largest ginkgo in Shimane prefecture, located in Ikeda, Sanbe-cho, Oda City, with a tree height of XNUMXm and a trunk circumference of XNUMXm.

Studies have shown that it has the same DNA as the ginkgo at the Tamakimen Farm in Gumi-gun, Gumi, South Korea.The trees are vibrant and the yellow leaves in autumn have a fantastic view.