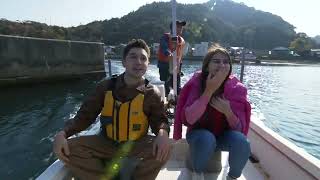 Izumo Taisha, which is famous as a matchmaking shrine, forms the core of Izumo culture with Okuninushi-sama as the deity, and is crowded with many worshipers from all over the country.

Hinomisaki Shrine, where the bright vermilion shines, is said to be a shrine that protects the night of the book of the day, and the Shinto ritual (sunset festival) has been held since ancient times.In April XNUMX, the story about the setting sun centered on Cape Hino from the time of the gods was certified as a Japanese heritage "Izumo, the sacred place where the sun sets".

At the western end of the peninsula, the Izumo Hinomisaki Lighthouse, which boasts the highest height in Japan as a XNUMXm high masonry lighthouse, rises. It has been selected as one of the "XNUMX Historical Lighthouses in the World" and "Lighthouse in Love" and has been protecting the safety of the sea since XNUMX.The sunset seen from the observation deck on the promenade around the lighthouse is spectacular.You can also enjoy a "sunset viewing tour" where you can tour this beautiful sunset with a local guide.

In the Sagiura area, a beautiful red-tiled fishing village landscape remains, and guided tours are being held to show you the Japanese atmosphere.In addition, by cruising using a fishing boat, you can also tour the coastline full of scenic beauty certified as Shimane Peninsula / Shishido Lake Nakaumi Geopark.

Recommended points in the western part of the Shimane Peninsula

If you walk along the promenade of Hinomisaki Coast, you can see XNUMX to XNUMX heptagonal joints formed by cooling the lava of rhyolite.

Since this rock has a shape like a scripture, the name of Fumishima is also called from its shape.

In addition, the "Shinto Shinto ritual (sunset festival)" is held on August XNUMXth every year.Fumishima has been a shrine related to Hinomisaki Shrine for a long time, and the general public is prohibited from entering the island.

On the sandy beach, which was the setting for the Kuniyuzuri and Kunibiki myths, the beautiful scenery selected as one of the 100 best Nagisa in Japan spreads out.

Also, on October 10th of the lunar calendar, a ritual called the Shinto ritual of welcoming the gods will be held here.It is said that gods from all over the country will come from this beach and hold a matchmaking meeting at Izumo Taisha Shrine.

It is a promenade of about XNUMXkm (about XNUMX minutes one way) that runs from the west side of Sagiura Port to Sagiura Lighthouse, and from the fork in the middle, you can also go to the beach called Umenada.

The view from Sagiura Lighthouse is superb.You can also cruise using a fishing boat, and you can enjoy the dynamic coastal landscape of the Geopark such as coastal caves from the sea.

At Cape Hino's restaurant, you can enjoy seafood bowls, sazae jars, and squid grilled with luxurious fresh fish and shellfish caught in the Sea of ​​Japan.

Izumo soba is blackish in color because it is made by milling buckwheat (buckwheat with shells) as it is without sorting the powder, but it has a high fragrance, flavor and unique texture.

Izumo soba, one of the three major soba noodles in Japan, is a recommended local gourmet.

"Jinzaimochi" was served at the time of the Shinto ritual called "Kamiarisai" held in October of the lunar calendar.

It is said that the "jinzai" became "zenzai" ⇒ "zenzai" and was introduced to Kyoto.Izumo is the birthplace of Zenzai.

This cave was formed by waves eroding the strata caused by the accumulation of volcanic ejecta.

It is a mysterious cave that is described in the Izumo Kokudo Fudoki as "the slope of Yomi, called the hole of Yomi".

Karakama Shrine is located on the hillside of a steep mountain that erupted from a submarine volcano about XNUMX million years ago.

It is a shrine that has its origins in legends associated with Susanoo-no-Mikoto, the god of worship, and the arrival of ironware culture.

Tachikuekyo, a valley with a total length of XNUMX km, is a large panorama with steep cliffs about XNUMX to XNUMX m high from the surface of the Kobe River.

It is a series of stunning special-looking rocks called Kamikameiwa, Ubaiwa, and Candle Rock, and is designated as a national scenic spot and natural monument.

The Ancient Izumo History Museum, located to the east of Izumo Taisha, has exhibits related to Izumo Taisha, as well as the history and culture of the entire Shimane prefecture, including Iwami Silver Mine, Tatara Ironworks, Bronzeware, and Izumo Fudoki Myth (with a myth theater). It is a museum to introduce.

Don't miss the XNUMXm-long model of the XNUMX/XNUMX real thing that reproduces the architecture of the ancient Izumo Taisha Shrine, and the bronze sword and dotaku designated as national treasures.

The Izumo Cultural Heritage Museum is a facility where you can learn about the traditions, culture, and history of the Izumo region.

The landowner of the Izumo region, the main building of the Ezumi family, and the nagayamon, which were built in 29, were relocated. The black pine beam set tells the style of the mansion.

No XNUMX bronze swords have been found in one place in Japan, and they are now preserved as a national treasure in the Ancient Izumo History Museum.

From the Kokokuji parking lot, climb Mt. Tabushi (456m) for about XNUMXkm and XNUMX minutes, and you will find Izumo, which is dotted with Tsukijimatsu, in the observation plaza. There is a panoramic view of the plains, Hii ​​River, Lake Shinji, and Mt. Sanbe in the distance.

Also, from the precincts of Ichihatayakushi, known as the "eye pharmacist" located on the north side of Lake Shinji, away from the east, Daisen to the east and Mt. Sanbe to the west with Lake Shinji under your eyes. You can overlook the mountains of the Chugoku Mountains.